In times like these, I begin to think about the hard questions. 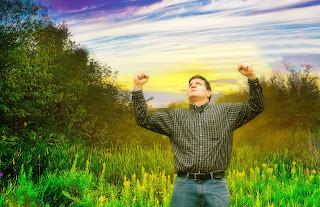 Like....
What is the worst thing that could happen to me with this virus?
What am I most afraid of?

The worst thing would be that I could die, or someone I love could die.
Death is the ultimate evil thing, right?

So what would happen to me if I died?
Would I survive somewhere after death?
And would it be a happy place or a not so happy one?

If I were to survive death, and find myself standing before the Creator of the universe, what would I say to convince Him that I should be allowed into heaven?
I would probably tell Him that I have been a good person.

But what if He probed a bit.  What if He said, "How good were you?"
I could say, "Well, I was a lot better person than Donald Trump."

Hmm.  That might not be saying a whole lot.
I could say, "Well, I've been better than most people actually.
I've done lots of good things and I certainly haven't done any really evil things.
I'm over 50% good.  Way over."

So I've probably made a passing grade.

But what if there is no grade?
What if it's just, "Are you good or not?"
How good is good enough?

But the Creator is supposed to be good too, right?  He cares about people.  And He should appreciate all that goodness He would see in me.

Maybe He would say,
"Yes, you're right.  You've been pretty good.  In fact, there's only one or two little tiny sins I ever remember you committing.  A little lie or two.  Oh, yes, and that small bit of mean gossip you passed on about your coworker.

But those little sins would not even show up under a microscope. The rest of you is really clean.
I think you're probably clean enough to enter heaven."
(Whew.  What a relief.)
"I'm sure one little microscopic bit of sinful virus won't amount to much. So we'll overlook that.
Welcome into my perfect home."

Posted by Something About the Joy at 8:03 PM 1 comment:

The Voices in Your Head are Lying

Posted by Something About the Joy at 2:07 PM No comments:

The Only People Who Will Go to Heaven

I have become convinced that the only people who will go to heaven at the end of this life are people who want God.

Heaven is God's home.  It is filled with Him.  If we don't want God, we wouldn't feel at home there.  In fact, if we don't want Him, we probably wouldn't even notice His presence, and the greatest pleasure of heaven would be lost to us.

It is lost to us now. 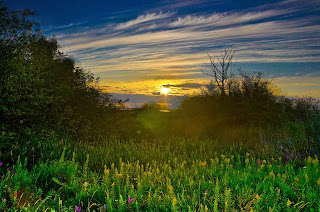 We were created for fellowship with God, and when Adam and Eve broke that relationship by their rebellion against His authority, that relationship was lost to them, and to all of us who are their descendants. They lost the joy, and eventually even the awareness, of His presence.  And they passed that loss on to us.

God's presence is still here.  He is everywhere, touching us with His love. He touches us in the sunlight, and in all things that give pleasure on this earth; He gives us every breath we breathe.  But in our natural state, we go about our lives seeing only the things we can relate to with our five senses, unaware of spiritual realities that are all around us, including the reality of God's presence.  And we wonder why we are so lonely.

We try to fill that God-shaped vacuum with everything else.  We fill it with other relationships, and when those fail to satisfy we fill it with work, or temporary pleasures.

Our striving for fulfillment drives us so frantically that we become addicted to our attempts.  Every substitute we put into our lives becomes a bondage that only makes us more miserable.

I'm pretty sure it was an awareness of God's loving presence that filled the Garden of Eden with pleasure for Adam and Eve.  They walked and talked with Him, and that had to be the most wonderful part of their Garden experience.

Walking and talking with God was natural to them.  Because they knew nothing else, they probably couldn't imagine not being able to do it.  They were unprepared for the horror of losing that relationship.

Maybe that's why they were so deceived by the lies of Satan.  They didn't realize, in that one fateful moment, that God's presence was their central delight, and so the pleasure of God's presence was lost to the human race forever.

But no.  Not forever.  God dearly loved the human beings He had created. He knew they would fall, so He had a back-up plan. Adam and Eve hid from God but He did not hide from them.  He sought them out. He drew them back.  At great cost to Himself, he provided a way for them to enjoy His presence once more.

And He draws us back too.  That deep loneliness we feel is the draw.  When it gets deep enough, demanding enough, we begin to want Him again.  And if we are willing to give in to that wanting, He will fill us with the pleasure of His presence once again.

Yes, there will be other pleasures in heaven--pleasures more wonderful than we can imagine.  In heaven, the distraction of pain will be gone forever and we will be free to enjoy the blessings of God's love that we are blind to in this life. But all those freedoms and wonders will be intricately entwined with the pleasure of His presence.

If we do not want Him more than anything, heaven will hold no real pleasure for us.

So God gives us a choice while we are alive on earth.

We can choose Him and heaven, or we can turn away, as Adam and Eve did.
God will honor whatever choice we make, for eternity.

FOR GOD, the Lord of earth and heaven
SO LOVED, and longed to see forgiven

THE WORLD, in sin and pleasure mad
THAT HE GAVE the only Gift He had.

HIS ONLY SON, to take our place
THAT WHOSOEVER--Oh what grace!

BELIEVETH, placing simple trust
IN HIM, the righteous and the just

SHOULD NOT PERISH, lost in sin
BUT HAVE ETERNAL LIFE, in Him.