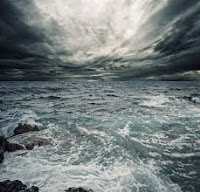 My craft is small, my vessel weak, not fit for ocean gale.


Yet here I rush, into the deep, where wind and waves assail.

The swells are high, the troughs are deep, their darkness swallows me.

Yet blindly, fiercely on I sail, thrust forward, helplessly.

What whim or fancy guides my fate? What sure & steady will?
One lifts me up; one thrusts me forth, and I am floating still.

What purpose drives the raging sea against my bark so small?
What sighing wind speaks earnestly of hope despite it all,

As if a portal just ahead, lies safe & full of light,
Awaiting, through the raging storm, my exit from the night?

for my dear friends, Sif Kadak and Alayne Adams 💗

Posted by Something About the Joy at 8:49 PM No comments:

Sometime in the winter of 1966,
at Northern Arizona University in Flagstaff

I'm leaning into the icy wind, pushing forward, straining to put one foot in front of the other, sniffing and covering my stuffy nose with a gloved hand to keep it from freezing and falling off. 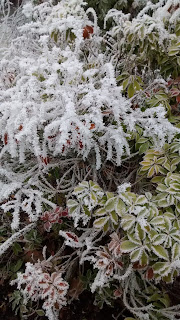 My dorm is at the edge of campus, about as far away from my secretarial job in the Philosophy Department as it can get. It's only a ten-minute walk, but in this weather it seems longer. It seems impossibly long. I try to focus on the warmth I'll find inside at the end of the trek, but, caught up in the present external reality of the freezing snow whirling in my face, I am internally embroiled in the One Great, Universal, philosophical debate of the ages:

If God is so good, why does He allow suffering in the world?

I don't want to be doing this. I'm fresh out of the school infirmary where I spent a week being poked with needles twice a day, pumped full of heavy antibiotics while the doctors wrestled with the stubborn ear infection that probably should have put me there a week before it did. They have released me. They say the infection is gone. But I'm still congested, exhausted, and chilled to the bone in the middle of this harsh Northern Arizona winter.

It doesn't seem like life can get any harder. I'm sick. I'm cold. My roommate is grumpy because I'm spending so much time in bed. The spoiled daughter of a rich Texas oilman, she's used to getting everything she wants, effortlessly. She is currently upset with me because I'm worrying her by my listlessness and my unnatural desire to spend every spare minute curled up in bed under a heavy blanket. She wants me to be well so she doesn't have to worry, so she has been scolding me, saying I need to get out of bed or I won't get better.

I am out of bed now, but only because I have to be. I'm behind on my schoolwork, but the job is more important. I'm trudging to my office because I need these 20 hours of work a week to stay in school.

My philosophical debate is with God. I'm perplexed. He's supposed to love and care for me, but my one and only winter scarf, the pink one my mother crocheted for me, has been lost for days and it feels almost like God's finger is directing this frigid air right down my neck.

God, do you see me? Do you see how hard this is? Do you care?

God and I have a good relationship. He is very real and personal to me and I love and trust Him. That's partly the reason for the debate: I don't understand why He's not doing something to relieve my present miserable condition.

Yes, in my heart I know you're with me, but I don't see any evidence right now. You are all powerful. You control the weather. So if you care, why couldn't you, at the very least, put the wind behind my back instead of in my face?

The debate swirls, along with the wind, all the way up to the entrance to the building I work in. I'm still asking questions, but they're not angry ones. They're honest ones, and God knows that. I open the door, pulling against the wind. I step inside and walk down the hallway.

One of my bosses, Jere Jones, is already in his office. I love these three young professors in the recently created philosophy department at NAU. They're fun to work for, friendly, and cheekily challenging. They snatch every opportunity to embroil me in lively philosophical debates of their own, playing with my naive belief in the real existence of a personal God like a cat plays with a toy stuffed with catnip.

I step into my office and there, on top of my desk, is my scarf--my only scarf--the one that was lost and I thought was gone forever--the one that will keep the wind from blowing down my neck.

Jere wanders in from his office and I point to my desk and ask, "Where did that come from?"

He takes his cigar out of his mouth, grins at me and says,
"God brought it."

My heart is suddenly suffused with warmth. I am not surprised. "I know," I say, "but how did He do it?"

It turns out, my princess of a roommate, who never lifted a finger to do anything that didn't immediately serve her own purposes, had been walking through the building when she saw my scarf in a lost-and-found box by one of the classroom doors. Instead of stuffing it in her bag and bringing it back to our dorm room, she went out of her way to walk downstairs to my office and put the scarf on my desk.

God speaks, but not always with words. I'm convinced He instigated that philosophical debate we were having in the storm on my way to work that day. Yes, his finger was behind the icy wind. I still don't know why, but the answer may lie somewhere in the middle of the lesson I learned.

God allows difficulties to come into our lives. Icy winds are the least of them. Difficulties way beyond our expectation hit us in the face, often when we least expect them and sometimes over and over again.

But the final, ultimate Truth is:

God sees.
God cares.
God is good, all the time.

It's been 53 years since this event.  The sting of the icy wind in my face is a distant memory, but I can still see that pink scarf on my office desk.

Posted by Something About the Joy at 10:13 AM No comments: